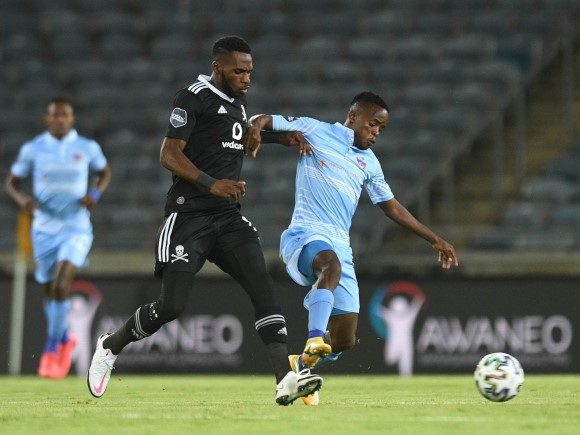 Orlando Pirates’ continued their penchant for late goals in the DStv Premiership as they defeated Chippa United 1-0 in one of four top-flight matches across South Africa through Wednesday afternoon and evening.

Fortune Makaringe netted with less than five minutes of regulation time remaining at Orlando Stadium, sealing a victory which sees the Buccaneers continue their uneaten run and rise to third place on the log (four points adrift of leaders Mamelodi Sundowns), while the Chilli Boys are 14th after suffering a fourth loss from seven games.

The day opened with a Limpopo derby between Black Leopards and Tshakhuma Tsha Madzivhandila, which saw the latter fight back from 1-0 down at half time to claim a 1-1 draw for the third time in a row. Roderick Kabwe’s penalty was cancelled out by Rhulani Manzini’s second-half equaliser at Thohoyandou Stadium.

The derby theme continued with an all-Durban clash which saw Golden Arrows claim just a second win of the season (though they are, in fact, unbeaten in the league) by defeating hosts AmaZulu 2-0 at Kings Park Stadium, thanks to a penalty from Nduduzi Sibiya and a fine strike from Velemseni Ndwandwe.

The fourth and final match on Wednesday saw Bloemfontein Celtic return to winning form by defeating Baroka FC 2-0 at the Dr Molemela Stadium. Late goals from Tumelo Mangweni and Ishmael Njoti proved the difference between the teams, as Phunya Sele Sele went some way to soothing the wounds of their MTN8 final defeat to Pirates this past weekend.

The DStv Premiership will wrap up for the year 2020 with a round of seven matches across the country this coming weekend, headlined by a clash between under-fire Kaizer Chiefs and Bloemfontein Celtic on Saturday evening.