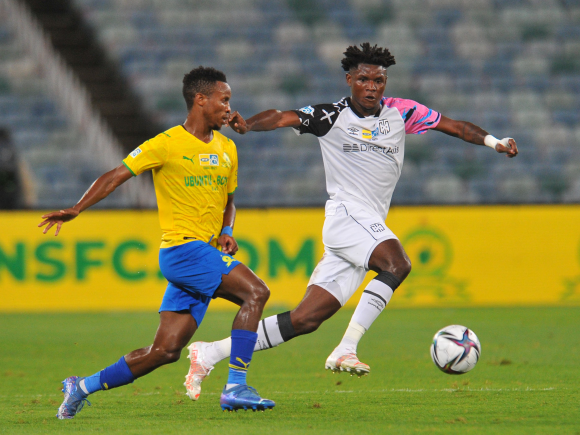 A repeat of last month’s MTN8 final, which pitted Cape Town City against Mamelodi Sundowns, is the headline fixture as South Africa’s DStv Premiership returns from the international break with a full round of matches across Saturday 20 and Sunday 21 November.

Sundowns won that final on penalties and will be looking to get the better of the Citizens again at Cape Town Stadium on Saturday evening, in order to keep up their outstanding league record thus far.

The table-topping Brazilians have taken 25 points from a possible 27 (to enjoy a five-point lead despite having played a game less than their nearest chasers) and have yet to even concede a goal in league action in 2021-22.

However, City coach Eric Tinkler has called on his side not to be intimidated by the prospect of facing the reigning champions: “We [want] to see a good response from them leading into this game. Its another tough game – Sundowns at home – but we are home and we need to dictate, be positive and we need to play without fear to get back to winning ways. It is very important.”

The weekend’s action opens with Golden Arrows hosting Orlando Pirates, with the latter team looking to bounce back from defeat to Kaizer Chiefs in the Soweto derby prior to the international break. The defeat still stings the Buccaneers, though co-coach Fadlu Davids argues that they put in a fine display against the Amakhosi and need to continue in that same vein.

“It’s a really unfortunate situation that happened. I think [it was] total dominance from start to finish. But you have to use this dominance to score the goals when you are on top.”

Saturday also features surprise packages Stellenbosch FC and Royal AM looking to keep up their form with wins at home to AmaZulu and away to Sekhukhune United respectively.

Sunday’s two-game slate opens with TS Galaxy hosting Swallows FC at Mbombela Stadium in a clash which is something of a relegation six-pointer given the clubs’ current log positions, before the weekend round is wrapped up at the Harry Gwala Stadium with Maritzburg United hosting Kaizer Chiefs.

Maritzburg coach Ernst Middendorp – who had had two spells with Chiefs in the past – will hope to see an improvement on his side’s attacking play for the visit of the Amakhosi.

“In our forward movement in the moment we are not strong enough,” said the German after a narrow defeat to Sundowns earlier this month.

He added, “It’s not really where we have some combinations but not really forcing opportunities. The being connected, having a connected unit in defence is okay.

“But out of this the next step must come. We must be able to win the ball out of the combination and move forward and do a certain purpose run in front and to produce chances. And from this side that was definitely what was missing [against Sundowns].”