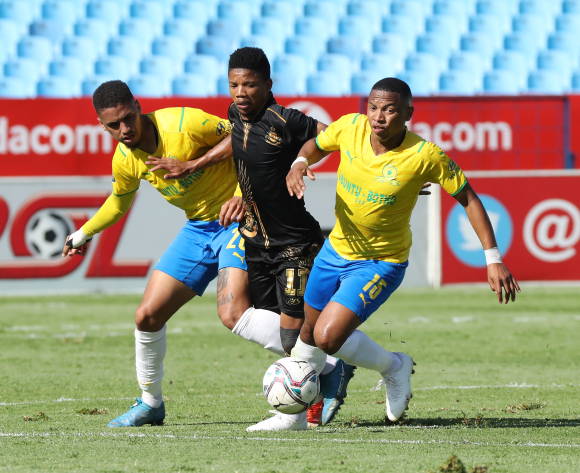 Mamelodi Sundowns have opened up an 11-point lead at the top of South Africa’s DStv Premiership after a midweek round which also saw Orlando Pirates held to a draw by AmaZulu.

Sundowns had to hold off a strong fight-back from Royal AM to win 3-2 at Loftus Stadium in Wednesday’s early game, with the log leaders establishing a three-goal lead thanks to strikes from Thabiso Kutumela and Peter Shalulile (two).

Royal struck back with two goals late on from Victor Letsoalo and almost forced a share of the spoils, though ultimately the Brazilians clung on for a 10th win from 14 unbeaten matches this term.

The late kick-off saw Pirates held 1-1 by AmaZulu at Kings Park Stadium, with the Durban side recording a fifth straight draw (and 10 from their 15 league matches thus far). The Buccaneers led through Deon Hotto, but Usuthu struck back just before half time with a goal from Tshepang Moremi.

The 17:00 kick-offs all produced away wins, with Swallows FC most notably claiming a victory for the first time since the opening weekend when they defeated Baroka FC 1-0 in Polokwane, thanks to a goal from Keletso Makgalwa. The result saw the Birds rise clear of the relegation zone, while Bakgaga Ba Mphahlele have dropped to rock bottom of the log.

SuperSport United shifted up to third with a 1-0 win at Stellenbosch FC courtesy of a late goal from Bradley Grobler, while Sekhukhune United remained second despite a 1-0 loss at home to Marumo Gallants, who have won three of their last four and moved four points clear of the red zone.

Wednesday should also have seen a clash between Golden Arrows and Kaizer Chiefs at the Princess Magogo Stadium, but the fixture was cancelled due to an outbreak of Covid-19 in the latter club’s camp. The Amakhosi were also unable to play in a match against Cape Town City last weekend, and their scheduled clash against Sekhukhune United on Sunday 12 December is also in doubt.

This midweek round opened on Tuesday evening with TS Galaxy defeating Chippa United 3-1 at the Mbombela Stadium in a relegation six-pointer, thanks to goals from Mthobisi Mngomezulu, Menzi Ndwandwe and Wayde Lekay.

This was followed by Cape Town City edging Maritzburg United 3-2 at home, with strikes from Mduduzi Mdantsane, Fagrie Lakay and Tashreeq Morris. The result broke a three-game winless run for the Citizens, but extended the Team of Choice’s drought to seven league outings.

The DStv Premiership will continue this weekend with a full round of fixtures on Saturday 11 and Sunday 12 December, headlined by the Tshwane derby between SuperSport United and Mamelodi Sundowns.