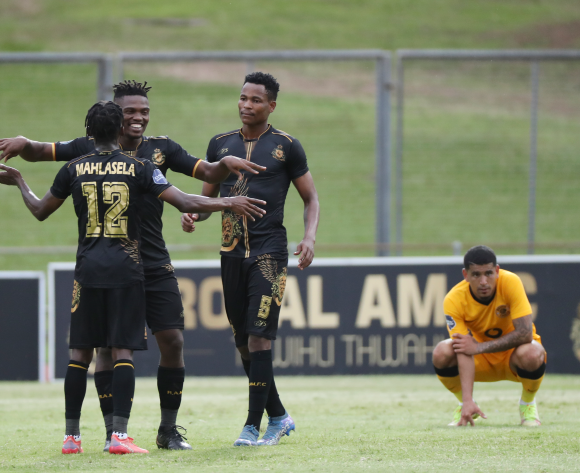 Kabelo Mahlasela of Royal AM (l) celebrates victory with teammates as Keagan Dolly of Kaizer Chiefs reacts in disappointment during the DStv Premiership 2021/22 football match between Royal AM and Kaizer Chiefs at Chatsworth Stadium, Durban on 19 December 2021 ©Gavin Barker/BackpagePix

South Africa’s DStv Premiership wrapped up a thrilling weekend of action with two games on Sunday, as Royal AM completed a ‘double’ over Kaizer Chiefs to move into second place, and Chippa United secured a key win in a relegation ‘six-pointer’.

The weekend closed out with Chippa moving out of the relegation playoff spot thanks to a 2-0 away win over fellow strugglers Maritzburg United at Harry Gwala Stadium.

Striker Bienvenu Eva Nga netted both goals for the Chilli Boys, with the Cameroonian now scoring for five straight games and hitting the back of the net seven times in the process – including a second successive brace.

Earlier in the day, Royal AM again bloodied the nose of heavyweights Chiefs with a 1-0 win at the Chatsworth Stadium for a ‘double’ over the Soweto side. Victor Letsoalo – who scored twice in Thwihli Thwahla’s famous 4-1 win at FNB Stadium back in September – haunted the Amakhosi again, scoring the only goal of the game from the penalty spot in the first half to see them rise to second spot on the log on goal difference ahead of Stellenbosch FC.

Friday’s matches featured a 1-0 win for AmaZulu away to Marumo Gallants – courtesy of a late goal from Thembela Sikhakhane, with Usuthu breaking a run of seven straight draws – as well as Mamelodi Sundowns crushing Orlando Pirates 4-1 at Loftus Versfeld to emphatically underline their dominance at the top of the log.

The Brazilians ended the weekend with a massive 17-point lead, and their victory over the Buccaneers was secured by goals from Themba Zwane, Pavol Safranko (two) and Peter Shalulile.

Saturday afternoon had Stellenbosch FC claiming a 1-0 home win over Baroka thanks to a goal from Solomon Letsoenyo – with the Maroons breaking a seven-game winless drought, while Bakgaga’s was stretched to 12 matches – and TS Galaxy claimed a first away point of the season after Wayde Lekay’s equaliser cancelled out Sbonelo Cele’s opener for a 1-1 draw at Golden Arrows.

The DStv Premiership will wrap up for 2021 with 10 matches spread over the next four days, with the final clash scheduled to be Orlando Pirates at home to AmaZulu on the evening of Thursday 23 December.