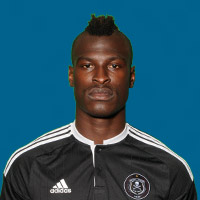 Now into his second season with Orlando Pirates, Edwin Gyimah has yet to fully nail down a place in the starting XI. The Ghanaian doesn’t lack for talent or endeavour, but he has been unable to establish himself in midfield, while his appearances in defence have sometimes been unconvincing. In the 2016/17 season he will look to take his game to another level and become a key figure for the Buccaneers.