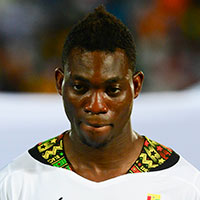 One of the Black Stats most exciting players, Atsu bounced between clubs for the better part of five years and despite signing for Chelsea in 2013 the winger never played a competitive game for the Blues. He finally found a permanent home in Newcastle two years ago and has gone on to establish himself as somewhat of a fan favourite. Scored the Goal of the Tournament at 2015 AFCON.