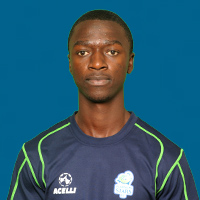 Platinum Stars have completed the signing of Robin Ngalande from Bidvest Wits on a season-long loan ahead of their 2015/16 Absa Premiership campaign.
Born in Dedza, Ngalande began his career with Civo United. He later joined the youth team of Spanish club Atlético Madrid in September 2010, joining from the youth ranks of South African club Mamelodi Sundowns. Ngalande had been offered contracts by sixteen other European clubs.
Ngalande returned to South Africa in 2012 signing a two-year contract with Bidvest Wits.
On 10 July 2014, Ngalande signed a season-long loan deal with Ajax Cape Town.