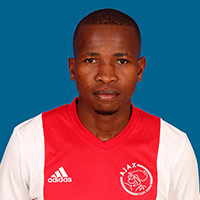 Thabo Mosadi enjoyed a fine first season with Ajax Cape Town, playing in the majority of the team’s matches and firmly establishing himself as a key player. The 26-year-old was signed from the University of Pretoria, where he established a reputation as a hard-working, box-to-box midfielder. The Katlehong-born player, who has also represented Jomo Cosmos juniors and Alexandra United, will look to pick up in the new 2017/18 season where he left off in the last.