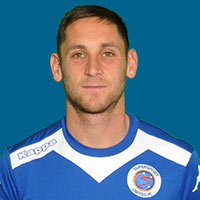 The Bafana Bafana international joined SuperSport United in August 2015 having up till then played his entire professional career in the United Kingdom. The former Chelsea and Rangers youth player featured for Bradford City, Oldham Athletic - who he captained - and Doncaster Rovers in England's lower leagues before rejecting a contract extension with the latter. Having failed to secure a European move, Furman returned to the country of his birth. Having struggled in his first few months playing in the PSL, with poor discipline testament to him taking time to adapt, Furman found his feet when he was handed the skippers armband after Thuso Phala decided to relinquish the captaincy. Ended the 2015-17 season on a high, scoring a memorable goal against Polokwane City before lifting the Nedbank Cup title in the Limpopo province. He lifted the same trophy 12 months later, and will now set his sights on league glory.