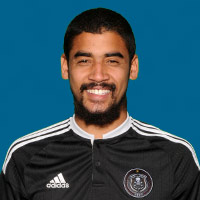 Capable of playing as a centre-back, right-back or in defensive midfield, Abbubaker Mobara’s biggest asset is his versatility. The 23-year-old was signed by Orlando Pirates from Ajax Cape Town in mid-2016 and he enjoyed a fine first season for the Buccaneers once he established himself in the team. Mobara, who hails from Mitchell’s Plain has also represented South Africa at both junior and senior international level.