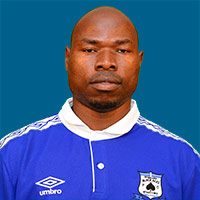 The mainstay of Black Aces’ attack, striker Collins Mbesuma started most of the team’s matches last season but registered just a handful of goals. The Zambian veteran is best remembered for a record-breaking season with Kaizer Chiefs back in the early 2000s, but he has not been as prolific ever since, going on to represent Mamelodi Sundowns, Moroka Swallows, Golden Arrows and Orlando Pirates before a move to Aces in 2014.