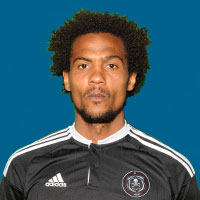 Senegalese Issa Sarr has established himself as one of the best defensive midfielders in the PSL and he was a key figure for Orlando Pirates in 2015/16. The 29-year-old made his name with Chippa United and Platinum Stars between 2012 and 2014 before moving up to the Buccaneers, where his hard-running style and forcefulness in the tackle have made him a fan favourite.