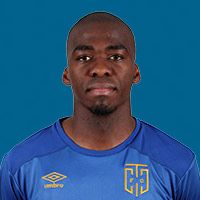 Midfielder Mpho Matsi played in around two thirds of Cape Town City’s matches through the 2016/17 season and was a steady presence in the engine room. The 27-year-old, who was born in Mamelodi and has been on the books of Arcadia Shepherds, University of Pretoria and Black Leopards in his club career, will be aiming to continue his consistency with the Citizens in the new 2017/18 campaign.