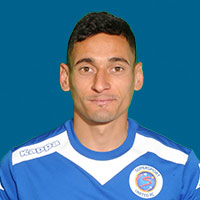 The Cape Town born midfielder officially joined SuperSport United in June 2016, having signed a pre-contract with the Tshwane club six months earlier - joining the club following a successful spell with fellow Absa Premiership outfit Polokwane City. Alexander revived his career in the Limpopo province and was arguably Rise and Shine's best player for two years running, having failed to break into the Ajax Cape Town first team prior to his move. Alexander will be hoping for more influential second season at the club, having struggled with injury throughout the 2016-17 season.