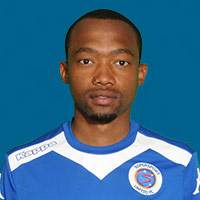 The former North West University striker joined SuperSport United from the University of Pretoria ahead of the 2016-17 Premier Soccer League season, signing a three-year deal. Orlando Pirates, Kaizer Chiefs, Mamelodi Sundowns and Platinum Stars were all interested in signing the talented forward-cum-midfielder; with Matsatsantsa beating their Absa Premiership rivals to the signing of the left-footed ace. Mnyamane ,who can play in several positions, be it as an out and out striker, winger or even in midfield, first made a name for himself in the Varsity Cup competition before joining AmaTuks for whom he contributed 17 goals in three seasons. Mnyamane has been capped by Bafana Bafana on one occasion; scoring on his debut against Swaziland. Will be hoping to hit the ground running at SuperSport having suffered relegation with the club's Tshwane rivals last season.