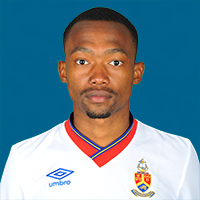 One of the most exciting players in the Premier Soccer League, Mnyamane was the first player signed by a top flight team from the Varsity Cup tournament where he played for the North West University – Mafikeng. The 2014/2015 campaign served as the left-footed striker’s breakthrough campaign with his goals earning him a call-up to the national team. Mnyamane was heavily linked with a move to Orlando Pirates, but decided to stay in the capital where he works a part time job as a real estate agent intern. A striker by trade, Sammy Troughton has played him out wide on occasion.