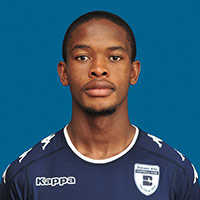 Ntshangase is a product of the Bidvest Wits Academy and showed during his time in the senior team over the past three season's that he is the real deal.He spent six years in the club’s development program before being promoted to the senior team and the man from KZN can play either in the backline or in a defensive midfield position. A future Bafana Bafana star, the former Absa Premiership Young Player of the Season represented South Africa at the 2016 Rio Olympics. Will continue to form an integral part of Gavin Hunt's team.