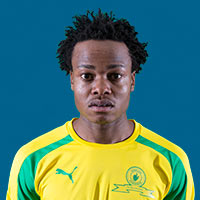 Pitso Mosimane has big plans for Percy Tau, with the Brazilians head coach signalling out Tau as the flag bearer for the clubs youth academy. Tau is an exciting, young, dynamic attacker who at times shone for ‘Downs in his first three seasons, before bursting into life in the previous campaign! Notably playing a leading role as the Brazilians almost upset TP Mazembe in Lubumbashi, but yet to fully establish himself as a first team regular, Tau opted for a loan move to Witbank Spurs before returning to Chloorkop ahead of the 2016-17 season.

The move paid massive dividends as Tau quickly established himself as a key member of the squad - going on to not only star for Mamelodi Sundowns in the CAF Champions League and FIFA Club World Cup, but also Bafana Bafana; finding the back of the net in an away win over Nigeria. Now a key member of 'Jingles' attack, Tau will be hoping to continue his eye-catching form for club and country.