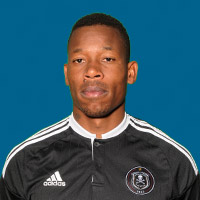 A mainstay in Orlando Pirates’ defence, whether at right-back or centre-back, Happy Jele was a regular for the team through last season and will be looking to make up for what was a disappointing campaign - especially on the league front - for the club. Jele is very much a leader in the Buccaneers’ set-up and has made well over 200 starts for the club since making his PSL debut more than a decade ago. The 30-year-old represented Walter Stars before signing for Bucs in the mid-2000s.