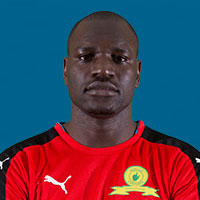 The Uganda international firmly established himself as the club's first choice goalkeeper over the past few seasons, continuing between the sticks following a solid an outstanding campaign - this after spending a couple of season’s watching on from the sidelines. The burly goal-minder was one of the standout players in as the Brazilians won a maiden CAF Champions League crown. The former Absa Premiership Goalkeeper of the Season has been in South Africa since 2006 - initially joining Sundowns Tshwane rivals SuperSport United - he will be gunning for another solid season for club and country.