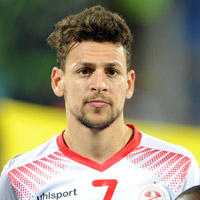 One of Tunisia’s top players, Msakni starred for Esperacne at a young age before earning a big-money move to the Qatar Stars League where he has almost scored at will over the last six years. On-loan in Belgium for the last six months of the 2018-19 season, Msakni missed most of last year due to injury, but looks to have quickly returned to his best.