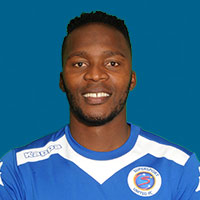 Another to make the move from Kaizer Chiefs, Gould was deemed surplus to requirements at Naturena following an injury laden end to his time in Soweto. The burly defender, though, never gave up hope and returned to a club where he tasted a lot of success between 2008-2012. The former Bafana Bafana international proved his metal, establishing himself as a first team regular as he was eventually named the club's Player of the Season for the 2016/17 campaign - in his first season back at Matsatsantsa. This after only being viewed as a backup signing.