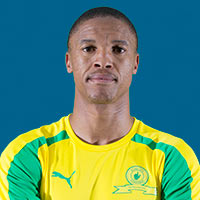 'Mr Cool' finally joined Sundowns from Bloemfontein Celtic in January 2014 following almost a decade at Siwelele. Nthethe formed a pivotal partnership with Alje Schut as the club won the league in 2013/2014 season and having struggled for game time in the season after, Nthethe returned to form in the previous campaign; forming an integral partnership with Wayne Sandilands as the Brazilians won back the Absa Premiership title in record-breaking fashion. Will again be key to Pitso Mosimane's plans as they eye more silverware - confident from 12 yards - the Sundowns vice-captain was named the 2015-16 Absa Premiership Defender of the Season and Telkom Knockout Player of the Tournament.