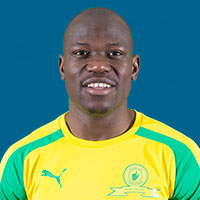 The Mamelodi Sundowns captain, officially took over the reins from Ramahlwe Mphahlele in August 2016, with Thabo Nthethe appointed as his deputy- the appointment was just reward for the Brazilians most consistent performer. Kekana will forever remember the 2015-16 football season, not only for the Brazilians run to league and cup glory, but also for the unbelievable goal he scored for Bafana Bafana against Cameroon; which earned him worldwide acclaim. The hard working midfielder, who joined Sundowns from Bloemfontein Celitc in 2011, has been key to the club's domestic success over the past six years and is instrumental in club's successful push for continental glory. The heartbeat of the Sundowns midfield, Kekana possesses the fiercest shot in the game - he is also one of the nicest guys and a true gentleman. His hard work paid the ultimate dividends in the 2016-17 season as he guided the club to a first CAF Champions League and CAF Super Cup crown. He will not rest on his laurels, though, and will be hoping to lead the club to even greater success as he aims to firmly establish himself as one of Sundowns greatest ever captain's.