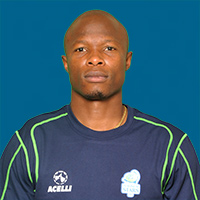 Letladi Madubanya has a wealth of experience having won the Absa Premiership during his time at SuperSport United.
Since then, however, he had an unsuccessful time at AmaZulu, followed by a stint at Bidvest Wits
He is a hard working central midfielder who works from box-to-box.
Madubanya first appeared in the PSL in the 2005/06 season for Tembisa Classic, and has gone on to represent the likes of Maritzburg United, SuperSport United, Bloemfontein Celtic, AmaZulu and Bidvest Wits before joining Platinum Stars in 2014. He made 18 league starts and scored one goal for Dikwena in 2014/15, earning him a new two-year deal at the club which he signed in June.