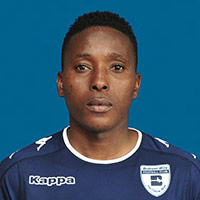 Also known as ‘Domingues’, the Mozambique international winger fell out of favour with Mamelodi Sundowns towards the back end of the 2014-15 season, despite being one of their best players the season before and proving to be a top class foreign import to the PSL. Pelembe adds goals from midfield and is a regular goal provider with pace to burn on the flanks and an appetite for winning.
It will be his second Absa Premiership campaign with Wits, but he is a veteran of the competition and won the title while at SuperSport United. Pelembe was a regular last season and along with Daine Klate the Clever Boys have two of the most decorated winger's in South African top flight history at their disposal.