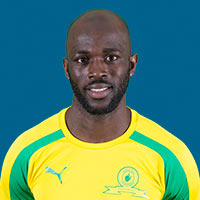 Laffor has been playing top flight football in South Africa for over a decade having first arrived on these shores from Jomo Cosmos in 2005. The Liberia international has achieved great success in his time in Mzansi with Tshwane clubs SuperSport United and Mamelodi Sundowns. Laffor was again touted with a move away from the club following a fall out with the clubs hierarchy,but he looks set to continue his career at Chloorkop, adding valuable experience to a team seeking more silverware. Often used as a winger, Laffor has in the past three seasons been effectively deployed as a striker. Scored the goal that reportedly saved Pitso Mosimane's job last season - chipping in with a hat-trick against AmaTuks to seal the 2015-16 Absa Premiership title for the Brazilians.