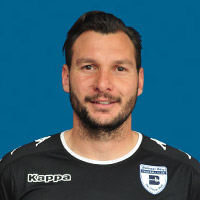 The Bafana Bafana goalkeeper returned to Bidvest Wits following five years in Belgium with KV Kortrijk. Keet, who started 142 games for the Jupiler Pro League outfit, provides valuable competition to Moeneeb Josephs. Joined the Braamfontein-based club on a free transfer - was also linked with a move to the Major Soccer League. Keet quickly established himself as Gavin Hunt's first choice stopper, but Josephs pushed the South African international all the way for the number one spot as the Clever Boys won a maiden league title. Will be hoping to continue his good run of form in the 2017-18 campaign.