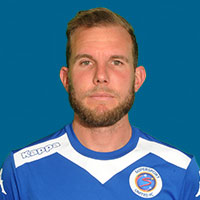 Has taken to the Premier Soccer League like a duck to water. The New Zealand international has been a real hit in South Africa's top flight having joined the club from Wellington Phoenix in January 2015. Despite only playing the second-half of the 2014-15 season, Brockie banged in 10 goals in all competitions for the club, ending the season a mere six goals behind Moeketsi Sekola in the race for the Absa Premiership golden boot. Brockie carried his good form into the 2015-16 campaign but again missed out on the top scorer accolade. A favourite for the golden boot in the 2016-17 season, Brockie failed to hit top peak during the course of the campaign, but still netted valuable goals as the club were crowned Nedbnak Cup champions. A constant transfer target of Mamelodi Sundowns, Brockie has an outstanding goal ratio for their Tshwane rivals. Rather strange to think that he has such a poor record at international level having only scored one goal in almost 50 caps for the All Whites.