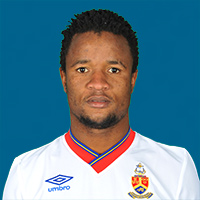 Zimbabwe skipper Partson Jaure established himself as a first team regular in his first season at the capital outfit. Well suited to playing across the defensive line, the now 25-year old arrived at Tuks having impressed in the 2014 CHAN tournament in South Africa as a replacement for Buhle Mkhwanazi. With Tebgo Monyai not getting any younger and the club deciding not to hand on to Siyabonga Shoyisa, Troughton will be counting on Jaure to fill the gap at the heart of defence.