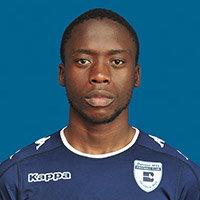 Ben Motshwari continued to impress in what was his second season playing in South Africa's top flight and will be eyeing even greater heights during the 2016-17 Premier Soccer League campaign. Having joined from ABC Motsepe League team, Trabzon FC, the attacking midfielder took to the Absa Premiership like a duck to water and has showed lots of promise under Gavin Hunt. Motshwari, who's strike against Chippa United was named the goal of last season, will be one of the players to watch once again.