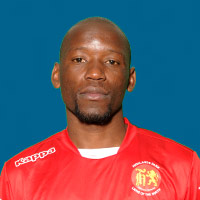 Having snubbed interest from Bidvest Wits, Free State Stars and Platinum Stars the former Bafana Bafana international joined Highlands Park - having decided not to stay on with the defunct Mpumalanga Black Aces who relocated to Cape Town at the end of last season under the name Cape Town City FC. With 26 international caps to his name, the former Golden Arrows hardman brings bags of experience to the Tembisa-based club. The 30-year-old was part of the South Africa squad for the 2010 FIFA World Cup on home soil.