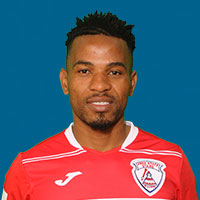 Nhlanhla Vilakazi was a regular in the heart of midfield for Free State Stars through the 2016/17 season and will be aiming to retain his place in the team in the new campaign. The 30-year-old is a hard-working, box-to-box midfielder who has plenty of experience and nous. Vilakazi, who hails from Benoni, has also represented Golden Arrows, Western Province United, Bay United, Ajax Cape Town and Maritzburg United in his senior club career.