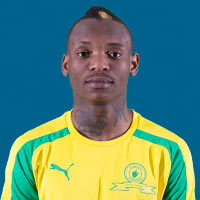 The outstanding player of the 2015-16 Premier Soccer League season; Khama Billiat was named the the Absa Premiership Midfielder, Players' Player and Footballer of the Season following a memorable campaign with the Brazilians. The former Ajax Cape Town winger has established himself as one of the best footballers on the African continent, starring not only in South Africa's tip flight, but also in the CAF Champions League - prompting interest from North Africa and Europe. Billiat scored 13 goals, chipping in with a whopping 20 assists in all competitions in the 2015-16 season. The Zimbabwe international's finishing has improved a lot which has seen his value sky rocket - also played an integral part in the Warriors qualifying for the 2017 African Cup of Nations. Continued where he left off in the first half of last season - leading the club to African glory. Injury, though, played it's part in limiting his game time towards the back end of last season and the Zimbabwe national will be hoping it is something he can shake off before the new campaign shifts into gear.