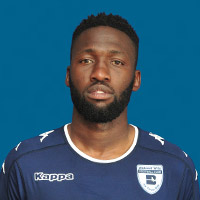 Having starred for University of Pretoria he was signed by Bidvest Wits three years ago - also broke into the Bafana Bafana set up during his time as AmaTuks skipper. Mkhwanazi was also linked with a move to Orlando Pirates and Mamelodi Sundowns, but it was the Clever Boys who eventually won his signature.
Mkhwanazi will be looking to continue his strong partnership with Thulani Hlatshwayo in defence. Touted as a South Africa international regular, Mkhwanazi will be eager to get back to his best form. Can also play as a defensive midfielder. Will be eager to solidify his partnership with 'Tyson' - having battled Bongani Khumalo for a starting berth throughout the 2016-17 season.