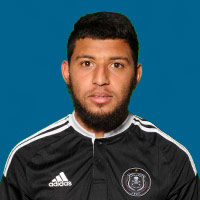 Signed from Ajax Cape Town – along with Abbubaker Mobara – in June 2015, Riyaad Norodien will be determined to establish himself as a key figure for Orlando Pirates, though he faces some stiff competition to play on the flanks or as an attacking midfielder. The 21-year-old has two years of top flight experience from his time with the Urban Warriors.