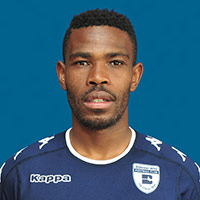 One-time Orlando Pirates target Thulani 'Tyson' Hlatshwayo has settled very well at Bidvest Wits since signing from Ajax Cape Town and played a key role in the Premier Soccer League over the past three season's for Wits. Comfortable at right or centre back, Hlatshwayo is used more in the middle by Gavin Hunt (be it in a 3-4-3 or 4-4-3 formation) due to his power and strength in the air. Hlatshwayo is from Soweto, but spent his youth development days down in the Cape at Ajax and has since become a regular in the Bafana Bafana side. The Clever Boys captain was the club's standout player last season as the Braamfontein-based club won a first ever MTN8 and Absa Premiership title. Named Player of the Season and Players Player of the Season, 'Tyson' will now be hoping to kick on and hopefully lead the club to continental recognition.