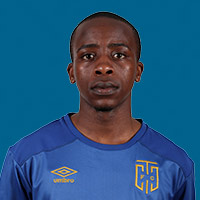 Midfielder or right winger Thabo Nodada had a 2016/17 season that was disrupted by injuries but he still managed 11 league appearances and chipped in with one goal. The 22-year-old, who hails from Ixopo, made his name with Black Aces before the Mpumalanga club morphed into Cape Town City in 2016. Nodada will look to have more regular playing time in the new 2017/18 campaign.