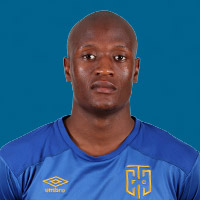 Judas Moseamedi was not a regular starter for Cape Town City in the 2016/17 season, but he did make a strong impression in his showings as an ‘impact substitute’ and was rewarded with a healthy haul of goals. The 23-year-old’s aim in the 2017/18 campaign will be to see more action in the run-on XI and continue improving on his goal return. Moseamedi made his name with Black Aces before the club morphed into CTC.