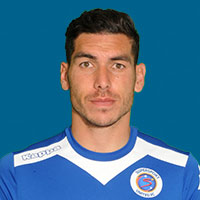 New Zealand international Michael Boxall followed fellow countryman Jeremy Brockie to SuperSport United ahead of the 2015-16 PSL season. The burly defender, who operated at right-back for most of the previous campaign, joined the club from Wellington Phoenix, having impressed Gordon Igesund on his trip to Australasia with Bafana Bafana two years ago. Quick and physical, Boxall ended the his first season on a high having struggled with the pace of the South African game for the first few months of the season. A real threat from set-pieces.