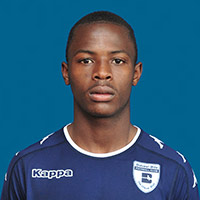 Bidvest Wits drew Mahlambi into their youth set up from the School of Excellence and he has grown from strength to strength ever since - emerging as one of South Africa's brightest talents. A livewire attacking midfielder/striker who likes to drift to the left wing, Mahlambi is a gifted footballer who turned a few heads in his first season with the club. The teenager, who has been compared to Benni McCarthy, took the league by storm scoring four goals, assisting a further three before a anterior cruciate ligament (ACL) injury cut short his breakthrough campaign. Mahlambi also missed the 2016 Rio Olympics having played a key role in helping the U23 side book their ticket to Brazil. Will miss the start of the 2016-17 season as he continues his rehabilitation, but will be confident of coming back stronger as he sets his sights on Europe.