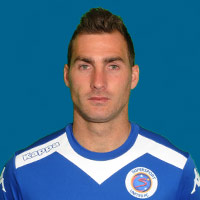 Often used as an impact player to great effect, Grobler will be hoping for a starring role this season. The former Ajax Cape Town, Göztepe and Platinum Stars striker looked sure to leave SuperSport in January 2016, but decided to fight for his place and did so to great effect; finishing off the season with a flurry of goals as SuperSport sneaked into the top eight before clinching the Nedbank Cup title. Will be eager to build on where he left off last season.