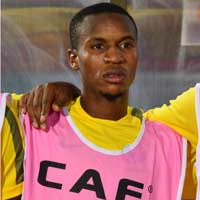 The attacking midfielder made his senior international debut against Australia in May 2014 and he was included in the Bafana Bafana squad ahead of the 2015 AFCON finals.