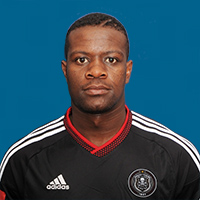 Ntsikelelo Nyauza was not a regular for Orlando Pirates through the 2016/17 season, appearing in roughly a third of the team’s matches. The 27-year-old right-back is a reliable option in his position, but the Buccaneers often look to Thabo Matlaba, who is not as defensively sound but offers great attacking thrust. Nonetheless, Nyauza, who has represented South Africa at senior international level and played for the likes of Roses United and Platinum Stars, will hope for a better season in 2017/18.