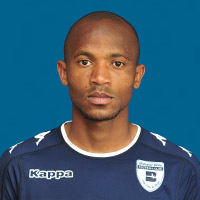 Mlambo has enjoyed a meteoric rise over the last year and a mere eight months after signing for Chippa United from Cape Town All Stars in the National First Division, the midfielder finds himself playing for the Clever Boys. Wits offered the Chilli Boys a 'record-breaking figure' with Mlambo having penned a new four-year deal with the Port Elizabeth club weeks before his switch to Gauteng. He will help fill the void left by Sibusiso Vilakazi.