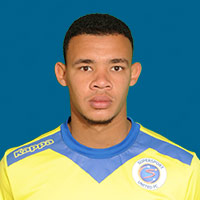 The shot-stopper made his international debut for South Africa in March 2014 against Brazil and he has been used as back-up goalkeeper in the Bafana Bafana team over the years.