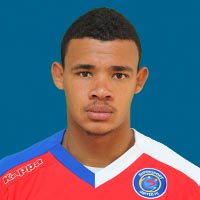 Ronwen Williams has firmly established himself as the club’s first choice goalkeeper over the past season with the Port Elizabeth born gloves man playing a pivotal role in Matsatsantsa’s Telkom Knockout success. The 23-year is a terrific shot stopper, but has in the past been guilty of being at times ‘over confident’. He is prone to the odd mistake, but is a match winner on his day. Title winning teams are built on an outstanding defence and Gordon Igesund will be banking on the Matsatsantsa’ youth product to produce the goods.