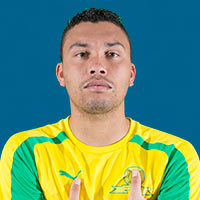 Seen as a direct replacement for now Kaizer Chiefs defender Ramahlwe Mphahlele, the Brazilian defender joined the Chloorkop based club ahead of the 2016-17 season following spells in his homeland, Romania and most recently Portugal where Pitso Mosimane scouted the burly centre back. Nascimento was able to add immediate value in his first season, with his ball playing ability suiting the Mamelodi Sundowns style of play. He also never misses from the penalty spot!