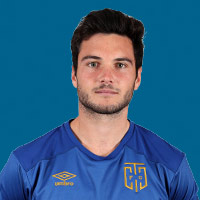 Austrian midfielder Roland Putsche was a hit in his maiden season in South African football, establishing himself as a regular presence in the Cape Town City engine room. The 26-year-old is a hard working player who gives solid cover to his defence, but he also has some good attacking instincts and chipped in with a couple of goals in City’s league campaign. Putsche will aim to continue his strong form for a second season with the CTC.