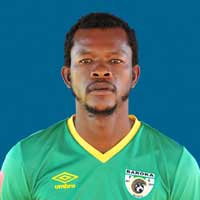 Shaku featured in many games for the side and will want to continue with his solid performances for the club. His role in the central defence will be tested and will now want to show his qualities at the back.